Why International Women's Day is important at JustProtect

“My father used to have an Attarr (natural perfume oil) shop”, Nanny recalled. She raised me on tales of how she, as a little girl she was allowed to be in her father’s shop to help with customers and even listen in on business meetings. When I questioned how she learned English, she told my sister and me that she taught students English in a local college. We didn’t question these stories; however, they seem extremely progressive for a pre-partition 1930’s India.

In 1947, a year after her wedding, the India and Pakistan partition created turmoil for millions of people.  Newly wed Nanny was tasked with keeping the elders and children safe while my great-grandfather and grandfather helped our families escape the horrors of partition to a safer place. After their re-location as political refugees in India, and not long after the birth of my mother, my grandfather passed away.

In 1973, my mother left Nanny and the extended family to join my father in the UK.  As recent immigrants starting a new life, my parents both needed to work and invited Nanny to live with them and help with childcare 9 months after I was born.

Once my sister and I were in school full time, Nanny decided she should start working in order to legitimately claim a pension.  As an older female immigrant, she was awarded the prestigious job of being a cleaner in the local tax office. As a 7-year-old I remember catching the bus to her “office” after school and helping her collect discarded paper in a large bag while she cleaned the dust-off desks where the professional office workers worked.  I still remember telling my friends at school that i'd seen the inside of an office.. I didn't tell them how, I was too embarrassed.

As a 7 year old I have early memories of mum working in factories that produced printed circuit boards for electronics products, she would often teach me which components went into household consumer products.  Was this my first exposure to electronic engineering?  I did think it was cool when mum got a new job at another local electronics factory, Plessy.   She was one of many women that were building the electronic circuit boards and components for a car called, “Thrust 2”.  On October 4th, 1983, Thrust2 reached a top speed of 650.88mph and held the land speed record for almost 14 years. For a brief second, I was the coolest kid in school because I'd seen Thrust2 in person.

After Plessy closed its doors, Mum applied to be a part time retail assistant in a local department store.  Over the next decade she rose through the ranks until she was regional manager. After retiring, she founded and ran a highly successful catering company.  Not too shabby for an immigrant that could barely speak English

On International Women's Day, it is exactly 8 years since Nanny passed, I wanted to share these personal stories because they represent the qualities I required over and beyond academia and professional experiences. Had Nanny & Mum, and the countless other extremely strong and naturally curious ladies I was exposed to as a child, not met their challenges with determination, resilience and persistence against a re-occurring backdrop of cultural and family values, boys like me would not have been exposed to and be able to share these stories, and ultimately their legacies. These stories, and many like them, have the potential of reshaping societal and professional biases for the better...starting with how we raise little boys to be real men of tomorrow. 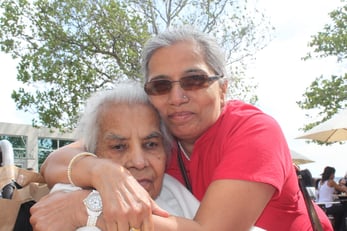 Happy International Women's Day to all the unsung Heroines.  Our Mothers, Grandmothers, Aunts, and Sisters.

Vikas is founder & CEO of JustProtect